by A G Howard 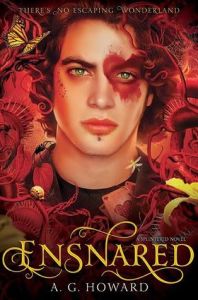 “My precious Alyssa, share reality with me. Give me forever. We will wreak such beautiful havoc together.”

After surviving a disastrous battle at prom, Alyssa has embraced her madness and gained perspective. She’s determined to rescue her two worlds and the people and netherlings she loves. Even if it means challenging Queen Red to a final battle of wills and wiles . . . and even if the only way to Wonderland, now that the rabbit hole is closed, is through the looking-glass world—-a parallel dimension filled with mutated and sadistic netherling outcasts.

In the final installment of the Splintered trilogy, Alyssa and her dad journey into the heart of magic and mayhem in search of her mom and to set right all that’s gone wrong. Together with Jeb and Morpheus, they must salvage Wonderland from the decay and destruction that has ensnared it. But even if everyone succeeds and comes out alive, can they all truly have their happily ever after?

It’s been 4 months since I read Ensnared. And to be honest I’m still seething a little bit from that ending. I fell in love with the first book of this series, Splintered. It was dark and twisted with the best imagination that had me hooked from the first page! As a designer I was completely wowed by the gorgeous cover, snazzy purple font and the actual choice of font! Along with the beautifully designed chapter title graphics and the the layout. I found myself under A G Howard’s spell and I had to have more.

My review for Unhinged (and a better summary of Splintered) can be found HERE.

So other than the return of the amazing covers, coloured type and gorgeous graphic chapter titles what can you expect from Ensnared?

Well not definitive choices that’s for sure! I felt so let down by Ensnared. I wanted it to be that big finale you expect at the end of a trilogy but it just didn’t happen. At the end of Unhinged Alyssa’s mother was dragged back into Wonderland, and Jeb and Morpheus ended up trapped in Any Elsewhere. Alyssa had to show her dad his past in order to find the way to Wonderland through the looking glasses. From the very beginning Alyssa seems more focused on saving Jeb then actually saving Wonderland and this annoyed me. But the real problems occurred when Alyssa and her father reach Any Elsewhere and she sees Morpheus again. From that point on Alyssa begins the torturous Morpheus vs Jeb debate AGAIN! Who does she love? Both of them apparently. But can she have both? Well according to this book, yes she can! I was really annoyed by this ending because it felt like she chickened out. It felt wrong that Alyssa could have both of them at the end, as so much of this trilogy was the battle between the two men for her heart.

With so much of the focus on the irritating love-triangle it was surprising how much else could be squeezed in to Ensnared. But that was probably its redeeming quality. We found out a lot of the history behind the romance of Alyssa’s parents. That romance was way better in my opinion. I enjoyed the history of Alyssa’s dad’s family and how he came to be stuck in the evil sisters webs. I also enjoyed the descriptions of Any Elsewhere and the scary magical creatures stuck there. I loved Jeb’s crazed living art and I found the merging of Red and The Queen of Hearts really interesting.

All in all, I still love A G Howards writing style and her imagination for ghoulish things but there was just to much indecision. Her romance issues overshadowed to much of the storyline to make this the amazing conclusion I really wanted.