Deadly Thorns by Kathleen Peacock   and   Unhinged by A. G. Howard 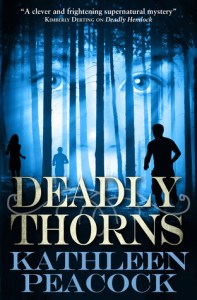 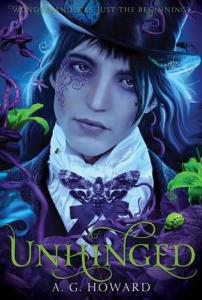 There is such a curse that comes with a sequel, especially a sequel to a mind-blowing masterpiece. How can you possibly top the first one? Jurassic Park made cinematic history… Jurassic Park 2?… not so much… as much as I hate to admit it… Twilight (the book or the film) AMAZING… New Moon… meh, not so much…

I have a feeling that 2014 is going to be the year of the sequels for me. So we may as well start with a bang!

I have two sequels to review, both of which had such hard acts to follow.

I read Deadly Hemlock a year ago, back in January of 2013. In Deadly Hemlock we followed Mac on a path of discovery as she tried to find out what had actually happened to her best friend Amy. We were slowly introduced to a world where a large part of the population were infected by a disease known as Lupine Syndrome, a disease that infected humans, causing them to turn into rabid wolves that attacked others and infected them but like so many other stories it’s never as clear cut as we are lead to believe.

In Deadly Hemlock we are briefly shown that humanity is believed to be under threat, and that the authorities could not control this epidemic. As humans do, the ‘Normal’ people condemned the infected, stripping them of their rights and either killing them or herding them up into ‘rehabilitation’ camps.  This is where we find ourselves in Deadly Thorn.

Mac (human) and Kyle find themselves inside one of the new, smaller rehabilitation centres know as Thornhill. These centres are meant to help reform the teenage wolves and help them to control their shifting in the hope that one day they will be able to be released back into society. Let’s just say, any suspicions you have are probably correct. What it says on the tin? Yeah it’s wrong. But who’s going to care enough about a pack of infected people? Society has already forgotten about them…

Mac must find out what is really going on in Thornhill and somehow find a way to save her friends and herself before it’s too late!

I liked that Mac was fully committed to Kyle in this book. I did find it frustrating in Deadly Hemlock when she was flitting between her love of Kyle and her growing affection for Jason. I did however find it slightly annoying that her devotion to Kyle usually ended with her putting herself or others in danger just because she wouldn’t talk to Kyle before making decisions (for him). I also liked the way this was completely different to book 1. Sometimes the downfall of a sequel is repetition but I found this one rather refreshing with its complete change of scenery. I think the only thing that brought my rating down was that because there was such a large gap between books one and two, my expectations were so high, but my memory of things was rather vague.

Just a final thought: While reading this series so far, all I could think was how much it reminded me of X-men. Which isn’t a bad thing at all but I kept thinking of Magneto and how he had changed for the worse due to the Fear-Induced persecution he had endured throughout his life. Will book 3 be as explosive as the finale of the X-men trilogy I wonder?

And now to Unhinged

Well where to start… I suppose with, unlike Deadly Thorn, I was rather disappointed with this sequel.

Splintered (book one) was just so stunning! I was completely bewitched by A G Howard’s beautiful writing, her marvellous imagination and her unique take on the classic, Alice’s Adventures in Wonderland. These plus the gorgeous cover and amazing choice in font, paper and illustrative detailing and I was a goner.

I loved Alyssa and completely understood her infatuation with both Jeb and Morpheus. I liked that it wasn’t a straight forward retelling but almost like a continuation of a story that has been distorted overtime. I adored the twisted darkness Alyssa encountered in Wonderland while on her mission to complete Morpheus’s tasks.

Unhinged continues on from Splintered. Wonderland is under attack. Red is back and is after revenge for her stolen crown! But Alyssa refuses to play. Turning her back on Wonderland and her Fae side, she is determined that she will not be sucked back into the madness that was Wonderland, she made a choice and she is sticking with it, to be human and live a human life. But Wonderland has other ideas, and if she won’t come to them, they will come to her!

I think one of the things that annoyed me most was Jeb. In Splintered, I found it cute that he was trying to be heroic and supportive but always seemed to get in the way or do something silly which ended with him having to be rescued but in this one he was just stupid, stubborn and was easily manipulated, leaving Alyssa upset and alone. This was another annoying thing, how much Alyssa mooned over him and got jealous of Jeb’s distracted attentions. Serious! Get a hobby!  Grow some wings. Oh wait she did, and that was the better half of the book. When Alyssa gave into her Fae side it was awesome. And her mum in this one… GREAT!

Morpheus was as amazing as always. Beautiful and twisted but with an underlining heart! He brings out a more interesting side of Alyssa and her family and I just want more and more!!!

I know I have a lot of negatives to say about this book but I still enjoyed it. There is still so much beauty in A G Howard’s writing that I can’t fully be unhappy with the story, the publishing team have again made the book look as beautiful as they possibly can and I can see the potential book three promises. In my opinion my true disappointment with Unhinged lies with the ‘middle book syndrome’ feeling. It had so much detailing and story padding to get in that it had hardly any time for the actual story.  Most of the action occurred in the last 25% and left us on such a bombshell I have no other choice but to sit on the edge of my seat for another year and eagerly await the next instalment of Splintered, aptly named ‘Ensnared’ (because I truly am).