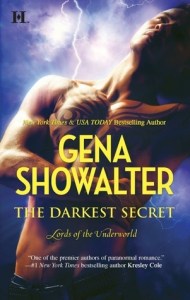 ‘…nothing draws people together faster than perilous situations.’ p.392

This is my A Book by an Author I Love that I Haven’t Read Yet choice for the 2015 Reading Challenge.

In this sexy new installment of Showalter’s bestselling Lords of the Underworld series, the haunted Amun meets a woman who tempts him like no other…

Keeper of the demon of Secrets, Amun can manipulate the darkest thoughts of anyone nearby. But when the immortal warrior is chained and isolated to protect those he loves, death is his only hope of release—until he meets Haidee, a fellow prisoner whose beauty and hidden vulnerability draw him into a reckless test of his loyalty.

Haidee is a demon-assassin, raised to despise Amun’s kind. Yet how can she hate the man whose touch sets her aflame? But to save him, she must give herself body and soul…and face the wrath of a powerful adversary sworn to destroy her.

It’s been a while since I read The Darkest Lie, book #6 in this series, so I was a little worried I would struggle getting back into the story but I shouldn’t have. It’s like revisiting a tv series you love, you can just pick it up and carry on.

If you don’t know anything about this series all you need to know is that there is a group of muscley warriors who have been forced to host demons that escaped hell because they stupidly opened Pandora’s box. They are like a family because they have lived together for so long. Each book sees one (sometimes two) of the Lords finding their soulmate and how that changes them for the good. It’s a simple formula but it works so why change it!

The Darkest Secret’s focuses on Amun. Amun is the keeper of Secret’s. He hears what people actually think, whether he wants to or not but it comes at a price. Amun can not speak because if he does his Demon will start shouting the secrets that he has collected causing havoc and pain to those around him.

At the end of The Darkest Lie (#6) Amun had gone into hell with Aeron to save Legion (Aeron’s adopted daughter). While there Amun absorbed all the terrible thoughts of those in hell along with thousands of demons. These demons tortured Amun till he could do nothing but writhe in pain, tearing at his body to try to remove the demons. This is how we find Amun at the beginning of this novel.

Like all the other stories in the Lords of the Underworld we have side stories that follow other Lords, these usually are the build up to the next novel. Along with Amun’s story we continued to see more of Strider’s story. Strider has been travelling across the world carting the Hunter Haidee back to the fort for interrogation. She was the one who killed Baid (the Keeper of Distrust). When he arrives at the fort he unknowingly brings together Amun and Haidee. Haidee somehow quietens the demons inside Amun allowing him to think. And so it begins… according to the Angel Zacharel, Haidee is the key to removing the demons from Amun. All they have to do is go back to hell. Simples! Right?

It was a cute romance as both Haidee and Amun are more inquisitive about their connection than any of the other Lords have been. They don’t really resist each other that much but are cautious and don’t rush things. I liked that they were very honest with each other, probably something to do with the fact that they could read each others minds. I was a little confused as to how much uninterrupted sexual encounters they were able to have in hell… but obviously I don’t mind that much.

Strider’s side story was weird. I didn’t understand why he felt a pull to Haidee. I was glad that he left. He, William and Paris meet up to go on vacation. They were an odd team. They were supposed to be relaxing but quickly go on a hunt for ‘bad people’. William and Paris went to find Gillian’s evil family and punish them for what they did to her, and Strider found himself (reluctantly) pairing up with Kaia the Harpy to go and kill a bunch of hunters that were chasing Strider. She has been smitten with him since the last book so I predict a soulmate connection here!

I always enjoy these stories and never get bored while reading them. I really want to read the next one The Darkest Surrender as it has to be about Strider (Keeper of Defeat).