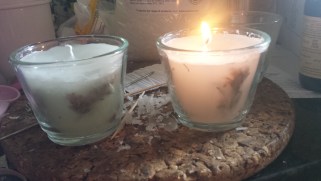 This whole process was an experiment…

So I decided I wanted to make flowery candles but I couldn’t find a pin (not that I looked so far)  so I made it up! 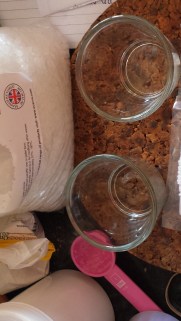 First off I put the wicks together, measuring so that I’d have enough to reach the bottom and be tied around a (slightly altered) toothpick. I did this by slipping the metal end on them, tying the tip to the tooth pick, then I measured it and squidged the end of the metal bit where I wanted it before cutting it from the wick roll.Then I spooned in the wax pellets. I left room in one so that I could add flowers afterwards and top up if I needed to, the other I filled high, having added flowers as I went.

Then I left them on the aga to melt. Only I didn’t really pay attention and they completely melted, so the one with the flowers had a bunch of brown flowers about the bottom of the glass. So I fished them out and this is how I finally managed to get the flowers in..

I removed the wax from the heat and watched it until the edges went cloudy, meaning it was beginning to cool and solidify. Next I used a metal skewer to put the flower where I wanted it and held it there till it stuck to the edge as the wax cooled further. I did this four times per candle and then let it cool completely. It dipped dramatically in the middle so I melted some wax and added it to the top, to make them fuller and smoother. I had intended to use a hot spoon and smooth it again at the end but I didn’t need to. I simply removed the toothpicks, tidied up the spare wax and trimmed the wick. The flowers, starting off fresh went brown again, so I’d recommend drying them first.

Please remember to be careful burning candles, especially candles with things in them,
Do Not leave them unattended.