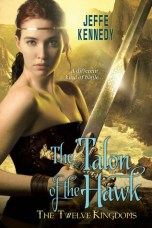 Three daughters were born to High King Uorsin, in place of the son he wanted. The youngest, lovely and sweet. The middle, pretty and subtle, with an air of magic. And the eldest, the Heir. A girl grudgingly honed to leadership, not beauty, to bear the sword and honour of the king.
Ursula’s loyalty is as ingrained as her straight warrior’s spine. She protects the peace of the Twelve Kingdoms with sweat and blood, her sisters from threats far and near. And she protects her father to prove her worth. But she never imagined her loyalty would become an open question on palace grounds. That her father would receive her with a foreign witch at one side and a hireling captain at the other—that soldiers would look on her as a woman, not as a warrior. She also never expected to decide the destiny of her sisters, of her people, of the Twelve Kingdoms and the Thirteenth. Not with her father still on the throne and war in the air. But the choice is before her. And the Heir must lead…

I don’t know if this is last in the series, I can’t see what else would happen and we’ve run out of sisters, but at the end of this there were just so many loose ends! I seriously did consider that I was missing some chapters, certainly an epilogue. As I neared the end I was convinced there’d be another book, there wasn’t enough book left to complete everything. But they managed to get it half done by the end and it certainly seemed rushed. This big important event was just…there…and we never got to see how the after effects affected things.

Please Note: This could be classed as a spoiler – and at the end of the book Ursula still hadn’t completely come to terms with who she was, what the world was and how she fit into it all, at least not to my satisfaction. I know ‘open endings’ are popular, but you still need a certain amount of end…

Other than that I liked this story too. The sisters understand themselves (a little) better now and they’ve become close again. They’re about to do wonderful things and it’s going to be amazing.

I still feel Amelia was my favourite, she had the biggest change. From spoiled princess to…the strong woman she is today. It was amusing to see how the other two reacted to their new sister, even if it wasn’t as dramatic as I’d have liked.

I’d have loved to have seen more about Dafne, seen them give something back to her. She lost everything and they all know who she should have been, it just would have been nice.

So, a good book, a good series, but I’d have liked a bit more of an ending.