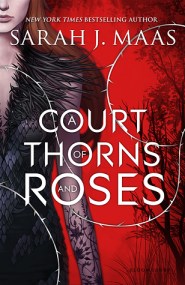 “He stole you away into the night, claiming some nonsense about the Treaty. And then everything went on as if it had never happened. It wasn’t right. None of it was right.”
“You went after me. You went after me – to Prythian.”
- page 264

A thrilling, seductive new series from New York Timesbestselling author Sarah J. Maas, blending Beauty and the Beast with faerie lore.
When nineteen-year-old huntress Feyre kills a wolf in the woods, a beast-like creature arrives to demand retribution for it. Dragged to a treacherous magical land she only knows about from legends, Feyre discovers that her captor is not an animal, but Tamlin—one of the lethal, immortal faeries who once ruled their world.
As she dwells on his estate, her feelings for Tamlin transform from icy hostility into a fiery passion that burns through every lie and warning she’s been told about the beautiful, dangerous world of the Fae. But an ancient, wicked shadow grows over the faerie lands, and Feyre must find a way to stop it . . . or doom Tamlin—and his world—forever.

This is certainly what is says on the tin: A blending of Beauty and the Beast with Faerie lore. This is one of the best BatB retelling’s I’ve read and at this point I can say I’ve read a few! (As well as the original)
I really liked how this story followed the original theme of the Beauty and the Beast, almost to the letter even while it was completely different. I even love how it’s exactly a faerie story too. Basically it’s some how stayed true to both of it’s original parents and I find that pretty impressive.

Feyre was a little annoying with her inability to think about what was going on around her as well as her sheer unobservantness. Also, what was with that riddle fail?! So the perfect ‘Beauty’ character really. And Tam was the perfect Beast character, locked down under a spell, to her a vile creature, whose driven to protect his people, the also her. But it’s also the perfect Faerie tale too. A girl spirited away to the land of the Faeries, her life forfeit to them.

My least favourite person, excluding the obvious, is her father and I love her sister for what she did. I hope that one of the next two books is for her and, I hope, a certain violet eyed High Lord, perhaps the other for the last sister and the one that’s lost so much…

I’m dying to know what it was that shocked Rhysand so much at the end, and really hoping it’s not going to pick a love triangle up in book 2. So far there’s been little to no indications, just some possible hints at the end, but her other series has a love triangle in it and I hope it’s not a trademark. Plus it would completely ruin the Beauty and the Beast theme!!

2 comments on “Review: A Court of Thorns and Roses”