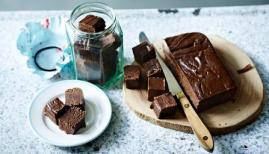 This is the fudgiest cheat fudge I’ve found yet! And once you know what you’re doing you can change anything you like! If you’re conscious of your ingredients then both types of fudge are gluten free.

This recipe is By Lorraine Pascale from her book Home Cooking Made Easy. It can also be found on the BBC food website HERE.

Today I’ll be showing you how I made Lemon Meringue and Rose flavour fudge. For this I exchanged the chocolate count white chocolate, so that it wouldn’t have the strong chocolate flavour (or the colour). When editing this fudge previously we changed the sugar to white sugar, this time I didn’t which gave me a nice golden colour. This time, because I was making several batches in a row, I put the chocolate on the side of the aga and it had melted by the time it was time to add it which sped up the process only a little.

So I followed the recipe, (adding a little extra because I had mini tins of eveporated milk and there was just a bit more than 125ml per tin…) but with the ROSE FLAVOUR I added rose flavouring which I found in the cake isles when I was stirring it all together.

Next you have to pour it into your tray, (I lined mine so that I could move it out of the square tin once it was mostly set as I only had one tin that size, but two that were slightly more rectangular and too large for the actual setting stage) and leave it to set! I seemed to be racing against time with adding the chocolate and flavouring, it was almost like it was trying to set in the saucepan so it was set pretty quickly. Then it was just a case of leaving it for several hours (over night in this case) before cutting it and boxing/bagging it up.

For the LEMON MERINGUE FLAVOUR (I think I added too many marshmallows, reading the wrong line in the book, but no matter it was still super yummy) I followed the recipe again up until the end. I added the lemon curd to the chocolate.

I used a basic lemon curd because I wasn’t going to use expensive stuff in an experiment! But actually, my concern it wouldn’t be that lemon-y was groundless. It was quite pleasant stuff. I used roughly half of a 411g jar and I crushed up 5 meringue nests. I added the chocolate and lemon curd when directed and then added the meringue right after, remembering that the rose one set fast and this involved more items.

This one set fast too, needing incouragement to actually fill the whole tray. It stuck to the greaseproof paper too, so I had to cut off the edges (and eat them) the next morning when I was cutting it. then I just added it to a box/bag and it was all done.

Both were well received, the rose one tasted like Turkish Delight and the lemon meringue one was spectacular. Despite that one being far more solid and there seeming to be so much of it, that one went first! I think it was my favourite one too and I can’t wait to make more. But now I’m on the quest for a decent dairy free fudge. So we’ll see what we can find.