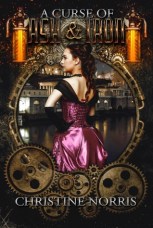 Benjamin Grimm knows the theater is much like real life. In 1876 Philadelphia, people play their parts, hiding behind the illusion of their lives, and never revealing their secrets.

When he reunites with his childhood friend Eleanor Banneker, he is delighted. His delight turns to dismay when he discovers she has been under a spell for the past 7 years, being forced to live as a servant in her own home, and he realizes how sinister some secrets can be. She asks for his help, and he can’t refuse. Even if he doesn’t believe in ‘real’ magic, he can’t abandon her.

Ellie has spent the long years since her mother’s death under the watchful eye and unforgiving eye of her stepmother. Bewitched and hidden in plain sight, it seems no one can help Ellie escape. Not even her own father, who is under a spell of his own. When she sees Ben one evening, it seems he is immune to the magic that binds her, and her hope is rekindled along with her friendship.

But time is running short. If they do not find a way to break the spell before midnight on New Year’s Eve, then both Ellie and her father will be bound forever.

This didn’t quite turn out to be the book I thought it was going to be. It was sort of a steampunk cinderella. It’s not obvious at first and it’s not the main plot, but you start to see the comparison early on, I noticed it enough by 14% to make a note. It’s quite clever how it’s slipped in there, some bits don’t quite fit smoothly, but I think it’s a teen book, which sounds like I’m saying it doesn’t matter, but I do find they tend to have more ‘plot holes’ because to explain them will just make the story too complex. Unlike cinderella though, the ending didn’t come when the ‘prince’ found his ‘bride’.

I do feel that too much time was spent on the before and not enough on the after, but then the curse was the primary plot so that couldn’t be sorted too soon into the book! And, unfortunately, there was love triangle moments. I’m 50/50 about the ending too, on one hand I didn’t like it, but on another I did, which is totally confusing.

I can’t really pick a favourite character in this book. There was one who might have been, had there been more of an after. As it is, we don’t get to see enough about her. And it’s obvious who I liked the least to be honest with you, you’ll know her when you see her, trust me!

This would be a good book for those who like fairytale retellings and are interested in trying steampunk books. It’s light on the strampunk and if it weren’t for the inventions one may even believe it to be a normal retelling with a twist.