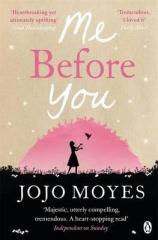 It’s hard to know how I feel about this book. I don’t often read contemporary books, especially ones that are sad, but Ms4Tune really wanted to see Jojo Moyes at Waterstones Picadilly for the book launch event of After You and I wasn’t walking into that situation unprepared. I’d only read one of her books before so this was one of the two I chose to read before hand – but ‘best laid plans’ etc – I delayed of course, as I always do – especially knowing it was sad – so when we went to the event, I was only at 60% of the way through. But I’d looked up the blurb for After You and so I knew how it would end. I have to say though, I think knowing this helped me accept it better. I was able to come to terms with how it was going to go and I also didn’t rush the last 40%. Of course it still made me cry.

It’s such a controversial subject and I’m quite firmly on the fence about the whole thing. People should have the right, but then, devastating those you leave behind is horrid. I can see Will’s point quite well, but I’m also a little disappointed with him as well as being somewhat scared that he made his choice because it was one of the only choices that he could choose for himself. And Louisa. I’m very disappointed with her. I would never have been able to leave it to the last minute like that, I’d be too scared to miss any thing and I’d know I’d regret it. I also think that while Lou was able to understand a little, Will didn’t understand at all. Yes he watched Lou grow as a person, but she grew because of him, I really don’t think she’ll continue to grow the way he expects she will without him and this is probably the saddest part for me.

Those who know my reading preferences and those who know the book will know why I’m not so fond of the end of this book, but I do think that Will is probably my favourite character. Lou’s Will that is, the one most of the way through the book.

I do now own a shiny copy of book 2, but knowing it’s rough path, I don’t think I’ll be reading it soon. I need to recover from book 1 first. I may read One Plus One in the mean time however.