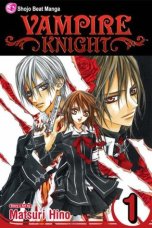 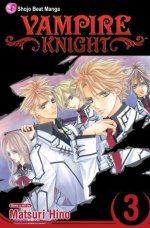 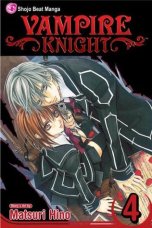 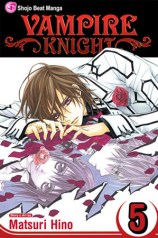 “No one can be a replacement for another person. That is why, farewells are always difficult.”
Vampire Knight Vol. 1

Yuki Cross has no memory of her past prior to the moment she was saved from a vampire attack ten years ago. She was adopted by the headmaster of Cross Academy, and now works alongside Zero to guard the Academy’s secret. Cross Adademy is attended by two groups of students: the Day Class and the Night Class. At twilight, when the students of the Day Class return to their dorm, they cross paths with the Night Class on their way to school. Yuki Cross and Zero Kiryu are the Guardians of the school, protecting the Day Class from the Academy’s dark secret: the Night Class is full of vampires!

Ok, so technically I originally only read up to #3 or so, but I’ve read up to 5 now and you can’t separate so 5 it is.

I stopped reading it because it wasnt fully published. I wanted to be able to read them all in one go. I’ve only recently finished collecting them so its time to (re)read them!

When I watched the vampire academy film it made me think a lot of this manga, what with the day classes and night classes, the ‘humans’ and vampires co existing but in vampire knight the humans have no clue that the night class is a bunch of vampires.

This also makes me think of LJ Smith’s Night World series, that also contained vampires that were born not made as well as vampires that are made.

This follows the pattern of most other mangas, lots of mystery and “what could they be up to?!” moments but the story is interesting and I cant wait till I get to the big reveal!

So far its been setting up and introducing people. Time to read somemore!