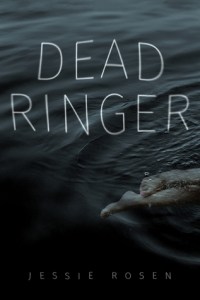 Thank you to Netgalley and the publisher for a chance to read this book in exchange for an honest review.
Published: 11th of November 2015

From the moment Laura Rivers steps foot into Englewood High, she notices the stares—and they aren’t the typical once-overs every pretty new girl endures. The students seem confused and…spooked. Whispers echoing through the halls confirm that something is seriously off. “That new girl looks just like her,” they say.

It turns out Laura has a doppelgänger, and it isn’t just anyone—it’s Sarah Castro-Tanner, the girl who killed herself by jumping into the Navasink River one year ago.

Laura is determined not to let the gossip ruin her chances of making a fresh start. Thanks to her charming personality and California tan, she catches the eye of Englewood’s undisputed golden boy, Charlie Sanders, and it’s only a matter of time before they make their relationship official.

But something is making Charlie and his friends paranoid—and Laura soon discovers it has to do with Sarah Castro-Tanner.

What really happened to Sarah? Why is Charlie unraveling? And how does Laura Rivers fit into it all?

After all, she’s the dead ringer for a dead girl.

Dead Ringer was all shades of Twisted! So believe me when I say this thrill ride will keep you guessing right up to and beyond the ending! It really plays with your mind. Of course, there are a few twists that I think most people will be able to see coming, because I definitely could but there are others that, well… wow, they catch you off guard and it’s seriously hard to choose a side to feel sympathetic for. Are they misunderstood??? Or 100% psychotic? Who knows, maybe both?
?
Everything in this story revolves around the mysterious death of Sarah Castro-Tanner. It was reported that she jumped to her death (committed suicide) but it was never really known why she did it. Most people presumed she was depressed because she was an outcast. But there are some people who know differently, and there are some people who are determined to uncover the truth.
?
The story mainly unfolds through the eyes of three individuals. First there is Laura, the new girl in town, but the fresh start she expected, in a new town, isn’t all she thought it would be because unfortunately for Laura, she bears a shocking resemblance to Sarah, and so everyone is gossiping about her. Her arrival brings back bad memories for many people in Englewood High School. None more than Charlie. Charlie is the second point of view. He’s hiding a lot of guilt and secrets that relate to Sarah’s death, but can he hide them from prying eyes or will the truth come out? Can he survive the consequences? The third point of view is from an alias, called Sasha. Sasha is a hacker who is determined to uncover the truth behind Sarah’s death but she’s not the only one looking for justice.
?
I found this story really captivating. It held just the right amount of suspense and intrigue to make this book a real page turner. I wouldn’t say that any of the characters were likeable, but I think that was the point. They were all hiding secrets and by holding things back, it was very hard to trust any of them. I spent a lot of the time trying to second guess their motives. Were they lying, were they hiding something, what could they possibly do next?
?
My only complaint is that I wasn’t aware this was going to be part of a series and it clearly is. It has the biggest cliffhanger ending of any of the books I’ve read so far this year and for that reason I have deducted a star. I know it seems harsh but I don’t like to go into a thriller, expecting to have it all wrapped up by the end, only to find I have to wait for book two to find out what on Earth is going on inside the head of that psycho! ‘The Psycho’ will now have to sit in the corner of my mind until I have answers… and that’s a little scary. But I would still say this is an exciting new YA mystery thriller. I will be interested in seeing what will happen next, as these characters are messed up!!!