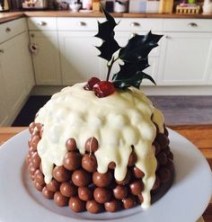 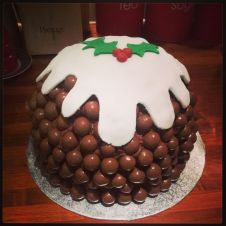 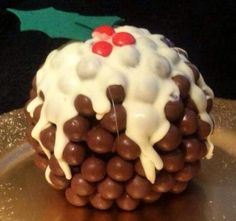 You may have seen these pictures all over the internet, I know I have!

We found these pictures on pinterest but we didn’t use any recipes from there. It looked like a chocolate cake and there’s only one chocolate cake I like so we used that one! That would be the

To get a decent shape I doubled the recipe because usually it send up quite a slim cake and this needed to be domed. I believe the cake tins I used were 7 inches. Once the cakes were cool they spent a day wrapped in cling film in the fridge. apparently this makes icing a red velvet cake easier so I thought it might help a chocolate cake too. 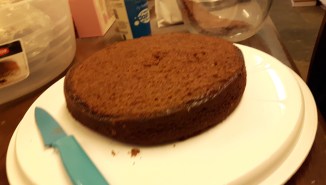 We cut the top off one cake so that the other would sit nicely on it – they came out of the oven high in the middle. Then we mixed up a double batch of the icing (double and a half wouldn’t hurt to be honest) and put it in the middle. We then cut the top edge off at an angle, where the top met the side of the cake tin, to make the top more rounded like a pudding (Forgot pictures) then we iced it all over. 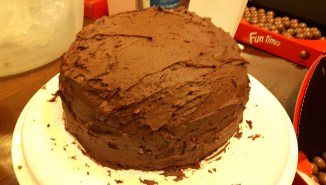 This needs to have a decent thickness so that the malteasers will stick into it. So far as we can tell there’s several schools of thought when it comes to adding the malteasers. We did a row around the bottom then the next row was slightly to the side so the malteasers sat in the dip. This only worked for parts of a row or two because malteasers aren’t actually a uniform size or shape so they ended up out of sync. 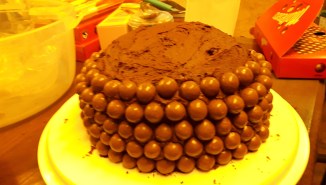 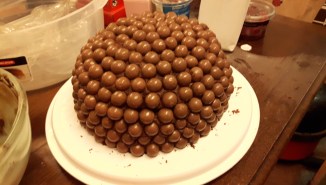 We did have to keep pressing them in because they did pop out again sometimes – hence the suggestion of extra butter cream. Once you got over the curve of the cake it was easier as they were resting on each other and didn’t NEED to be pressed into butter cream to stay. We used the better part of two 360g christmas boxes of malteasers. The rest were helpfully tidied up for us by Ms4tune’s husband…

Next we melted some white chocolate with some cream and poured it over the top. Possible could have done with more cream/chocolate to make the stuff go further but it still looks pretty good this way. Then while the top was still wet we added two cherries and some holly leaves and let it dry. 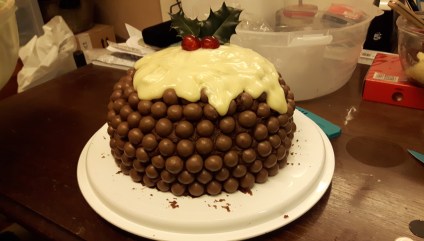 We ate too much. And it’s hard to cut this cake. Tastes good but you might want to share a piece! Over all it was great fun to make and I’d do it again, but very sickly.

We joked about cutting the malteasers in half because we;d eaten too many, but that’s actually not such a silly idea if you can get a nice sharp knife and have the time I think it will lower the sickly by half. Haha, see what we did there?!

Have you made this cake before? Do you have any tips or tricks?