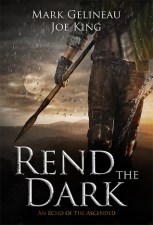 Thank you to Netgalley and the authors for a chance to read this book in exchange for an honest review.
Publish date: 15th October 2015

Rend the Dark is the first novella of the fantasy horror series of the same name. It is a classic monster story, told in a harrowing, fast-paced, 90-minutes. Reviewers compare it to Supernatural and Stephen King’s It. It is recommended for readers who enjoy fantasy, horror, and good old-fashioned scares.

I really enjoyed this introduction too. Though it’s set in the same world as Elinor’s A Reaper of Stone and Ferran even went to the same orphanage as Elinor – his part of the world seems a lot darker. While Elinor is all about believing in the old ways and holding up honour, Ferran is fighting off the horrid monsters that are hiding in plain sight, clawing at the world of Aedaron along with his fellow acolyte Mireia.
I have to say, the footmen type monsters in this made me think they were the nasty cousins of the Spidrens from Tamora Pierce’s The Imortals quartet. And they weren’t nice guys! I’d agree with that blurb up there, sounds like something you’d find in supernatural! And not one of those spoof episodes either.

Mostly this story seemed to be from Hil’s point of view, a sort of outside character, one of those Ferran and Mireia had gone to assist. I’d have liked for it to have been from theirs, so that I could know more about the Order of Talan – but then I suppose this makes more sense. This novella/teaser is shorter than Elinors, were it to be solely from the point of view of Order members, a lot of time would need to be spent explaining their thoughts and it would have perhaps bulked it up far more than the desired teaser length, so I guess I’ll just have to wait.
I’d like to know more about this monster fighting too- with the lantern and the song, but I’m guessing that’s being saved for book 2; which is going to be called Skinshaper according to the end of this novella.

At this point, I’m wondering; are all these previews and series going to link into one giant finale? And Just when do we find out more about the time mentioned in the legend that’s featured in both the books so far? Or is it just a throwaway foundation for these guys?