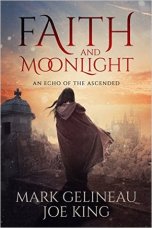 Thank you to Netgalley and the authors for a chance to read this book in exchange for an honest review.
Publish date: 15th December 2015

Faith and Moonlight is the first novella of the YA fantasy series of the same name. It is the tale of two orphans who get the chance of a lifetime, told in a fast-paced, 90-minutes. Reviewers compare it to Harry Potter, Divergent, and Ender’s Game. It is recommended for readers who enjoy fantasy, young adult, school stories, magic, and coming of age tales.

Roan and Kay are orphans.

A fire destroys their old life, but they have one chance to enter the School of Faith.

They are given one month to pass the entry trials, but as Roan excels and Kay fails, their devotion to each other is put to the test.

They swore they would face everything together, but when the stakes are losing the life they’ve always dreamed of, what will they do to stay together?

What won’t they do?

My review of the first book of the An Echo of the Ascended series can be found HERE the second HERE and the third HERE. Ms4Tune’s review of Faith and Moonlight can be found HERE - I don’t tend to read reviews until I’ve read the book and written my own. I like to have my own ideas.

I didn’t like this one is much as the others, but I liked it more than I thought I would. It was the line “What wont they do?” in the blurb – it’s ominous! It could still be ominous mind you, but I’m not so worried. This story fits in more with the first one, A Reaper of Stone, it’s about the Razors mentioned in that first story, their training grounds etc. However unlike the others, this is set right after they leave the orphanage, not years later after their training. Unlike the other books though, this one is a YA series which explains the younger characters. I just hope that it doesn’t fall into the usual YA traps!

I liked Roan, he seemed to be the major character of the two, at least in this novella. He’s loyal and determined. It’s his dream Kay is following, because he won’t do it without her. This is a little sad – that she has no dream of her own, but it also shows how committed they are to each other and the relationship they have. I hope this isn’t lost as they grow and train. I hope this stays their defining features. They’ve made some new friends already and what’s nice is that there seems to be no terrible bully character, they’re all about helping each other. Or at least, so it seems on the surface. Kay needs to carry out some Alanna (The song of the lioness Quartet by Tamora Pierce) style practising and she’ll be good to go!

I don’t think I like Gideon…whatever it is he did, I’m thinking it’s bad. And if it’s REALLY BAD, I can see him making an enemy of Roan, which could actually be interesting as he was hinting they’d be of a level and he’s clearly hoping they’ll be friends or at least a team. I just hope he didn’t break anything beyond repair.

The next book in this series was simply called “book 2″ so I don’t think it has a name yet. Ironically perhaps, this is the series set first, but it has been delivered last – almost like a prequel. I get the feeling that some important happenings will go about in this story, but we have to learn of the repercussions first. I have an idea or two but they are hopefully wrong!!