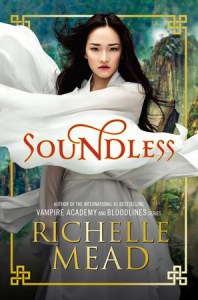 In a village without sound…

For as long as Fei can remember, no one in her village has been able to hear. Rocky terrain and frequent avalanches make it impossible to leave the village, so Fei and her people are at the mercy of a zipline that carries food up the treacherous cliffs from Beiguo, a mysterious faraway kingdom.

When villagers begin to lose their sight, deliveries from the zipline shrink. Many go hungry. Fei and all the people she loves are plunged into crisis, with nothing to look forward to but darkness and starvation.

One girl hears a call to action…

Until one night, Fei is awoken by a searing noise. Sound becomes her weapon.

She sets out to uncover what’s happened to her and to fight the dangers threatening her village. A handsome miner with a revolutionary spirit accompanies Fei on her quest, bringing with him new risks and the possibility of romance. They embark on a majestic journey from the peak of their jagged mountain village to the valley of Beiguo, where a startling truth will change their lives forever…

And unlocks a power that will save her people.

Popsugar Challenge #34. A book from the library

I went into Soundless apprehensively. I had noticed the low ratings and read a few of the reviews by other, disappointed bloggers and so, was somewhat prepared that this book probably wasn’t going to be the amazing book I anticipated it to be. It is a shame, that a book with such an intriguing and unique plot couldn’t quite meet the expectation of the reading community, but I wouldn’t go so far as saying I detested this book.

Soundless is the story of a village on top of a mountain. After a massive avalanche many years ago, they have been cut off from the rest of the world. The only contact they have is letters from the line keeper who also sends them food in exchange for precious metals. The whole village suffers from deafness and one day some of their village start to go blind as well. As metal mining reduces so does the food and in desperation, Fei and her friend Li-Wei attempt to climb down the mountain in search of help and answers.

I agree that it was disappointing to find so little cultural reference. I wanted something smothered in Chinese Folk lore but instead received, at best, something with a slight wiff. The names were by far the biggest cultural indicator, but if you changed them, you could have made this about any country in the world. I was also disappointed with the fantasy aspect of the story. In a similar way to Frozen by Melissa de la Cruz, (which I read last week), the paranormal aspect was only really introduced at the very end of the story and as a result ended up feeling a bit like a cop out ending rather than a serious conclusion.

I did however enjoy the romance. Fei and Li-Wei have always had feelings for each other but because they were from different social standings they were not allowed to have relations. Forbidden love is my guilty pleasure. I can’t help but want them to break free and find a way to be together and I must admit the best bit, for me, was when Fei turned her back on the easy option, to run away and be together, so that she could try and save her people. Her noble actions made her a really loveable character.

At times I found Soundless to be a bit boring because of its slow pace and odd society class systems. But in the end its cute romance won out and I feel I did enjoy it. So if you can, borrow this book and see what you think, you never know you might love it. But if you’re looking to invest in some Richelle Mead books, I’d probably save my money for her Vampire Academy Books, Paein will tell you why soon…