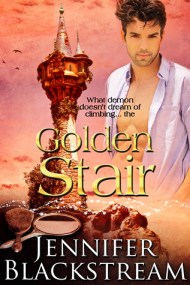 “Past experience had taught him that women would tell him anything if he just gave them the tome and space to do so.” 33%

Adonis is a Demon –an Incubus– bound in body by a vow. He requires a vast amount of energy just to live, energy he can only absorb through sex, more energy than any one woman can provide. His nature desires something he can never have; love and fidelity with a single woman and so he hides behind fleeting connections with multiple women and suggestive jokes and innuendos. He can’t allow himself to get close to anyone, not even a golden girl with hair as long as her tower is tall and eyes as lonely as his soul because he won’t ever be able to offer what she deserves, no matter how much he craves.

Ivy has lived in a tower, protected from the world all of her life. Her mother, a powerful witch who spends her days fighting in the war against the 5 evil kings, is her only company. She knows her mother only survives because of the healing magic she casts upon her every night and that her valley is all that keeps her safe but she can’t help but yearn for adventure and to see the world. When the feared demon prince of her mother’s vivid stories literally crashes into her world, Ivy finds herself facing a terrifying dream. Does she dare leave her tower?

Rapunzel! I liked this one the most so far. Ivy and Adonis are a perfect match. I love how at the end she NEEDS him as much as he NEEDS her, but that’s not why they’re together. When they first meet Ivy is pretty naive, though not as naive as she could be, for she has BOOKS! But her mother has told her fearsome horror stories of the lands outside her valley and she’s terrified of Adonis. Their worlds don’t meet up and he’s confused.

Rapunzel is not a fairytale I would have normally put in my top 5 but I think it’s risen because I liked Adonis. Because he was a ‘bad boy’ forced into the promiscuous lifestyle who really, really wanted to be good, stereotypical girl bait right? Meh, I liked him because he made a vow which he kept even as it broke his heart, not caring what anyone else thought because HE knew he was doing right. Yeah sure he could be called ‘broken’ but can also be called self-assured as that’s far more attractive. He had a handle on who he thought he was and he was happy with it.

Hey, Jennifer, please hurry and write the rest. I want to know what this kingdom is about. I have some theories and I need to know!!!