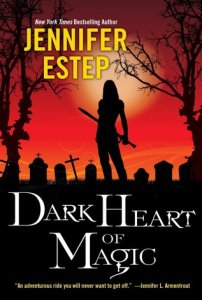 Something Wicked This Way Comes…

As a thief, I stick to the shadows as much as possible. But when the head of the Sinclair Family picks me to compete in the Tournament of Blades, there’s no escaping the spotlight—or the danger.

Even though he’s my competition, Devon Sinclair thinks I have the best shot at winning what’s supposed to be a friendly contest. But when the competitors start having mysterious “accidents,” it looks like someone will do anything to win—no matter who they hurt.

As if I didn’t have enough to worry about, mobster Victor Draconi is plotting against Devon and the rest of my friends, and someone’s going around Cloudburst Falls murdering monsters. One thing’s for sure. Sometimes, humans can be more monstrous than anything else…

I love returning to a series and finding the second instalment is just as good as the first. Dark Heart of Magic returns to the magical city of Cloudburst Falls, a place controlled by a number of magical families (a bit like mafia groups), that is basically a tourist hub for people to get up close and personal with magical creatures and magic users, for a price, obviously. This year the Families are holding a tournament, The Tournament of the Blades. The different families select members to compete and they fight duals till only one is left standing. This year Lila is selected along side, Devon, Deah, Blake, Katia and Poppy (to name a few), to compete and with 25,000 gold pieces as the prize Lila is determined to win. But while the Families play, it seems someone else is having some fun of their own, slaughtering magical creatures. Can Lila use her magical gifts to figure out who the murderer is?

The layers within this book were great. We had so much going on but it all balanced really well. On top of the tournament and murder mystery storylines we also had the continuation of Lila seeking revenge for her mothers murder and for information about her past, as well as the building relationship between Lila and Devon. And if that wasn’t enough we also have the mystery of what the heck are the Draconi family planning now?! It was so action packed that I just couldn’t put it down! The pacing never slowed down but had me reading at full throttle till the very end.

Lila continued to be a badass buffy-like super heroine! I loved her snarky attitude and her love for food, especially bacon. She was funny and quick witted and I giggled everytime she sarcastically commented on something. She never cried or waited for a man to save her. She thought logically and always attempted to save her own skin even if she did need help every now and then.

I couldn’t have asked for a better storyline. I’m not gonna lie and hide the fact that I figured out who the murderer was pretty early on but it didn’t detract from how much I enjoyed the story at all. If anything it just meant I could enjoy picking up on all the subtle hints Estep had planted for me to follow.

I liked how easily reminders from the last book were dropped into this one. I couldn’t remember much and it was nice to not feel confused by all the different creatures and people. And these reminders didn’t feel like they were being shoehorned in but just casually mentioned. Recapping can always be difficult but I felt Jennifer Estep did a really good job here. And it really helped me.

This is shaping up to be a really entertaining Ya fantasy series and I’m so excited that I have a copy of the next book. I’m jumping straight into it now! I would recommend this to anyone looking for a funny, fast paced but easy going urban fantasy series. (I hear it’s only planned to be a trilogy which is sad cos these characters and this world are amazing!)