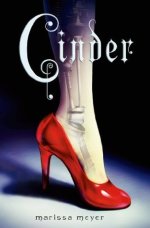 “But if there was one thing she knew from years as a mechanic, it was that some stains never came out.”
- page 299

Humans and androids crowd the raucous streets of New Beijing. A deadly plague ravages the population. From space, a ruthless lunar people watch, waiting to make their move. No one knows that Earth’s fate hinges on one girl.
Cinder, a gifted mechanic, is a cyborg. She’s a second-class citizen with a mysterious past, reviled by her stepmother and blamed for her stepsister’s illness. But when her life becomes intertwined with the handsome Prince Kai’s, she suddenly finds herself at the center of an intergalactic struggle, and a forbidden attraction. Caught between duty and freedom, loyalty and betrayal, she must uncover secrets about her past in order to protect her world’s future.

Originally part of a series review which can also be found HERE.

This was a re-read. The last time I read this, I went straight on to the next one and ended doing a series review. Which means this will not be a first impressions review which actually makes me a little sad. I’ve not got the excitement I had for Cinder the first time around, in fact I may resent it just a little, because it and it’s friends are between Winter and I – the book that currently holds all my excitement. But because my memory is more useless than a chocolate teapot I need to re-read them to know where I am, so here we are.

Though it didn’t hold all my excitement I and I was trying to read it with some sort of restraint, I still enjoyed it – I found future characters hidden all over in there – and the ending was just perfect. It was setting up for the next book, but I settled down, turned the page and found no more!

I still find this world terribly clever, a futuristic fairytale where the princess tries to save the prince. Oh, and by the way she’s a cyborg! Don’t let that put you off, I nearly did the first time I read this and boy am I glad I didn’t. I really thought that would prevent me from connecting with the character and I really have no idea why. Her story continues through the rest of this series, it’s not finished here, all wrapped up in a bow with a happy ending, but I do wonder if there will be another confrontation with her step-family like in some of the retellings, this would be a facinating interaction, from the middle of her HEA…of course she’s got to actually get there first.

If you love fairytale retellings and you have a thing for sci-fi then this is the book for you. I’d forgotten a lot of the storyline but I remembered as I read through and the problem is I’ve remembered more than was just in this book so I’m trying hard to not give any foreshadowing away while still doing justice to this book!